here’s what I think about matrix.org
The community is growing, is federated, is https, e2e-encrypted and the client is called RIOT!
So why is not ok to use this app, is amazing!
yes, it’s amazing..
So it’s better to have a deeper look and write what I collect in the last year

matrix.org started in December 2014 by some core developer working for AMDOCS. Checking now I see it disappear from the online FAQ after someone [asks for it on github], but we have a travel machine [thanks to web.archive.org], so we are able to see who is behind matrix.org and is a company called AMDOCS.

I didn’t know what was doing AMDOCS, but searching a bit I found out some comments and several websites about it.

First anonymous comment I get is [from hackaday] who says more or less this:

“So matrix is funded by AMDOCS:

Amdocs is a publicly listed NYSE company that also acts a spy-arm for the Israeli state, Isarel’s military, Israel’s government, and most troubling of all, for Israeli’s intelligence service Mossad;

Amdocs handles almost all telephone and data telecom subscriber accounts for most American and Canadian service providers (including wireless, cable, ISP, etc), thus they have unfettered access to all records typically available to the NSA, CIA, FBI, etc;

Amdocs shares any and all US & Canadian subscriber data with Israel’s government and various spying entities;

China and other countries have kicked out Amdocs and their garbage billing software because of these illicit activities;”

ok, then I started to search around about to verify this statements about AMDOCS and [on wikipedia I found this]:

Amdocs’ broad access to U.S. telephone transaction records has raised counterintelligence concerns in the U.S. government about the vulnerability of this information to exploitation by Israeli spies.[9][10][11] “As early as 1999, the National Security Agency issued a warning that records of U.S. government telephone calls were ending up in foreign hands – Israel’s, in particular.”[12]

In early 2000, federal agencies conducted a counterintelligence investigation to determine if Amdocs was being used by Israel to eavesdrop on U.S. government communications. The investigation found no evidence of such activity.[13] “

seems they are good to write stuff and provide it to governments, how is this possible?

Here I found [a forum with an article of a newspaper] talking about AMDOCS which explain how this company becomes one of the most important company in telecom during the Bush administration thanks to the failure of AT&T. Like NSO_Group (another very dangerous Israel malware company) also AMDOCS is buying AT&T engineer, professionals from US to work for them, because to build this you don’t need genius, just training and cash:

“A source familiar with the inquiries into Amdocs put to me several theories regarding the allegations of espionage against the company. “Back in the early 1970s, when it became clear that AT&T was going to be broken up and that there was an imminent information and technology revolution, Israel understood that it had a highly-educated and highly-worldly population and it made a few calculated economic and diplomatic discoveries,” the source says. “One was that telecommunications was something they could do: because it doesn’t require natural resources, but just intellect, training and cash. They became highly involved in telecommunications. Per capita, Israel is probably the strongest telecommunications nation in the world. AT&T break-up occurs in 1984; Internet technology explodes; and Israel has all of these companies aggressively buying up contracts in the form of companies like Amdocs. Amdocs started out as a tiny company and now it’s the biggest billing service for telecommunications in the world. They get this massive telecommunications network underway. Like just about everything in Israel, it’s a government sponsored undertaking.”

they basically grow from nothing to become a super-corporation able to generate a record in their database for every telephone call in US in 1999, they hired all the AT&T developers and start to write for cash some useful tool for the National Security of US. So try to guess what they are doing right now..

They are good to write, collect and hide.
So I stop and I start wondering:

I didn’t get it until I saw the amount of metatata on a server running matrix.
Asks your admins, they will confirm that.
There are too metadata, not needed and most of all not needed to be shared in a federated environment.

Matrix is federated (which is not peer to peer) and it’s ok that all is end-to-end encrypted, but all the metadata are shared cleartext with all the other matrix server. This means that one malicious server in the federated network can have access to the metadata conversation of other people

For all the other people check your metadata and [remember what NSA said]: 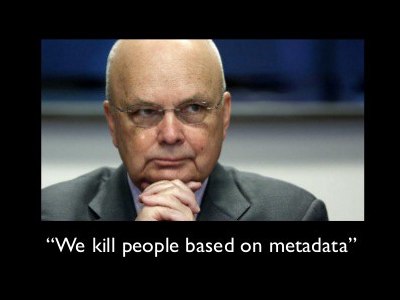 some urls for those who want to go deeper